A ticket for a domestic flight in the United States costs an average of $359. The average international flight costs $1,368 per ticket. Due to the high costs of air travel, passengers typically want to get the best deal. However, the prices appear to change frequently.

TLDR – The prices of flights may change several times per day, but it is more common for price changes to occur just once per day. Airlines often change prices throughout the week based on prices from the competition and other influencing factors.

Airlines frequently change the prices of flights to maximize profits and fill more seats. Based on the demand for a specific route and travel date, airlines may increase or decrease the price of a ticket. The updates to ticket prices typically occur during the day, resulting in mid-day price changes.

Airlines evaluate several factors to set prices for tickets, including the demand and availability of seats. Most airlines use computer software to automatically adjust ticket prices in real-time. The software analyzes supply and demand and the prices of flights from the competition.

The software updates ticket prices automatically, which may result in more than one price change per day. However, one frequent traveler found that the price of a ticket for a specific flight changed 135 times over 320 days. The price changed about once every 2.4 days.

Which day of the week are flights cheapest?

Many airlines follow a weekly cycle of increasing and decreasing prices. Discounts typically appear Monday night and slowly phase out during Tuesday morning, depending on how quickly the seats fill up.

By the end of the workweek, airlines begin increasing prices to compensate for the deals offered earlier in the week. The prices remain high over the weekend before the less expensive prices reappear on Monday night.

What Time of Day Is Least Expensive to Book Flights?

The lowest prices may be found in the afternoon on most days of the week. According to travel experts, the least expensive tickets appear on Tuesday afternoons. However, airlines may change their prices at any time.

To find the best prices, travelers should continue to check the latest airfares from a variety of airlines and booking sites. Deals rarely last long, especially when flying out of a major airport.

Choosing a specific time of the day for the flight may also result in different prices. For example, a flight that leaves at 4 am typically costs less compared to an 11 am flight on the same route. The least expensive flights leave early in the morning or late in the afternoon.

How Much Do Flight Prices Fluctuate?

When airlines first accept bookings, the price of a ticket is typically $50 more than if a passenger waited until the lowest prices become available. Those that book during the final week before the travel date pay the most, with an average price increase of $220.

From the best savings to the highest price, the cost of a ticket may fluctuate about $220. Buying tickets 21 to 115 days in advance tends to provide the lowest prices.

When Do Flight Prices Drop?

The price of flights often drops on Monday night or Tuesday morning. However, the price may also drop several times between the moment that the flight is offered and the departure date.

Airlines often begin accepting bookings for flights about 11 months before the departure date. When the flight first becomes available, the airline is likely to charge higher rates, as they still have many months to fill the seats on the flight.

The price of tickets often decreases about four months before the travel date. The prices typically remain low until three to four weeks before the trip.

At three to four weeks, the prices start to increase, as airlines anticipate more bookings from business travelers who are willing to pay more for air travel. The highest prices are found during the day of travel.

How Often Do Flights Get Canceled?

According to the Department of Transportation, only about 1% of flights get canceled. However, there are about 45,000 commercial flights each day. Based on these statistics, about 450 flights are canceled each day.

The main cause of cancelation is severe weather. Heavy snowfall, thunderstorms, and hurricanes may force airlines to delay or cancel flights.

Travel researchers have discovered that nonstop flights are less likely to get canceled. The earliest flights of the day are also at less risk of getting canceled.

Many airlines also post on-time arrival statistics for all flights. Travelers should review the statistics for the flight for the previous year and compare it to the industry average cancelation rate of 1%.

For example, a flight may have been canceled 2% of the time the previous year, which is twice the average, making it more likely to be delayed or canceled.

What Is the Average Cost of a Domestic Flight?

The average cost of a domestic flight is $359. When adjusted for inflation, the average airfare has decreased in the past decade.

In 2010, the average cost of a domestic flight was $336. After adjusting for inflation, the 2010 price was $392 in today’s dollars. However, airlines have compensated for stagnating airfare prices by increasing the prices of luggage fees and other charges.

American Airlines was the first airline in the United States to charge travelers an additional fee for checked baggage. Other airlines followed suit. Travelers now typically pay $30 for their first checked bag.

What Is the Average Cost of a Charter Flight?

The cost of chartering a plane ranges between $1,200 and $10,000 per hour of flight. The cost includes an hourly rate for the flight time, a fuel surcharge, crew fees, landing fees, and a Federal Excise Tax (FET). Charter plane companies also typically require a two-hour minimum flight time.

Billable flight time covers the largest portion of the cost of chartering a private flight. A mid-size turboprop aircraft with space for six to eight passengers may cost about $1,200 to $1,800 per hour. Paying for the crew and additional fees may add several hundred more per hour to the trip.

Do Airlines Edit Movies They Show on Flights?

Do Airplanes Have A Row 13?

Why Do Feet Swell on Airplanes? (9 Remedies)

4 Reasons Why Planes Are So Safe These Days

Why Do Babies Cry on Airplanes? 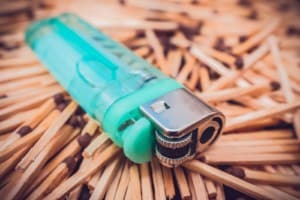 Can You Take a Lighter or Matches with You on a Plane?

Do Airlines Edit Movies They Show on Flights?

Do Airplanes Have A Row 13?

Why Do Feet Swell on Airplanes? (9 Remedies)

4 Reasons Why Planes Are So Safe These Days

Why Do Babies Cry on Airplanes?

Can You Take a Lighter or Matches with You on a Plane?